To function properly and keep drivers safe, paved roads need to withstand years of heavy traffic, freeze-thaw cycles and erosion. As the damage slowly accumulates over time, repairs can be disruptive and costly. Pavement preservation is a more cost-efficient method used to reduce the frequency of repairs and extend the service life of a roadway.

A strong bond ensures traffic loads are evenly distributed through all layers of the pavement structure, which makes tack coats integral to the road’s longevity. As in other aspects of pavement preservation, fast application time remains a priority.

For preservation of pavements with extensive damage, overlays use the existing pavement layer as a base for a new, fresh layer of pavement. Overlay methods such as “mill and fill,” thin lay and ultra-thin bonded wearing coarse all need a strong tack coat to keep layers bonded together.

Tack or bond coats use an asphalt emulsion to promote the bond between the existing surface and a new asphalt application during an overlay procedure, but some challenges are involved. Any errors during the coating application or subsequent damage can weaken the bond and pose a compatibly issue for the layers.

“If you don't have a good bond between the new layer and the old layer, they'll act like two separate layers,” explains Arlis Kadrmas, Asphalt Technical Development Leader at BASF. “What can happen if a bond failure occurs is what is usually referred to as slippage. The new layer will slip, and you'll see cracking and deformation of the top layer of the pavement. It's a very noticeable fatigue to the pavement.”

After the application of a tack coat, there’s a risk of heavy construction vehicles driving over and removing a thin layer of the coat, which is known as pick-up or tracking. While some tracking is unavoidable, excessive tracking can lead to reduced effectiveness in the tack coat.

ACRONAL NX 4627 is a styrene-acrylic polymer designed to be added to a bond coat emulsion to reduce the required wait period before vehicles can cross the bond coat without pick up. It also increases the effectiveness of the bond coat in preventing slippage and infiltration from water or dirt.

The problem with tracking

With non-modified emulsions, paving crews have to wait extended periods of time for the tack coat to dry, or break, before any further work can be done. This often results in long traffic delays and expensive downtime for maintenance crews.

If vehicles drive over the coating before it breaks, the resulting tracking can create dark marks on the pavement or compromise the bond integrity.

ACRONAL NX 4627 creates a barrier for vehicles that are driving on it, which helps to reduce the problem of tack coat pick-up.

“Crews have been using tack coats for many years, but they haven't been using modifiers,” says Kadrmas. “After spraying the emulsion, they would have to wait for a very long period of time. What ACRONAL NX 4627 does is create a barrier for the vehicles that are driving on it, which helps to reduce the problem of picking up the tack coat.”

Investing in high-performance emulsion additives such as ACRONAL NX 4627 was uncommon in the past, as funding for road infrastructure is often limited. Now, more local and state governments are seeing the benefits of reduced tracking and downtime in the form of less congested traffic and more visually appealing roadways.

“If you have a lot of tracking, that means the glue is being removed,” says Kadrmas. “ACRONAL NX 4627 added into the tack coat helps ensure that the glue stays on through the construction traffic as much as possible.”

Put to the test

When added to an asphalt emulsion, ACRONAL NX 4627 improves the bond coat at paving temperatures while reducing tracking. It does not interfere with the flexibility or the adhesive properties of the residue.

ACRONAL NX 4627 is easy to add to an asphalt emulsion, and the application rate is usually 0.05-0.08 gallons per square yard of a 30-50 percent residue emulsion. It’s also a neutral acrylic, so it can be used in either cationic or anionic asphalt emulsions.

“The emulsion goes out on a distributor truck, which will spray a lane of the road with the emulsion mixed with an emulsifier and water,” explains Kadrmas. “The water evaporates and leaves the emulsion, and as the water comes off, the emulsion and the acrylic form a film on top of the asphalt. That's what gives you that resistance to tracking while giving you a very good bond to the road.”

There are two main tests used to evaluate the performance of a tack/bond coat: a bond strength test and a tracking test.

The tracking test evaluates the tracking potential of the tack/bond coat residue by vehicles from the new road surface to other areas, while the bond strength test applies horizontal (shear) and vertical (tensile) force to evaluate bond strength.

ACRONAL NX 4627 performed well in both tests. It was found to increase the flexibility of pavement in cold temperatures and increase strength in warm temperatures. It’s also APEO and ammonia-free.

“From a long-term expectancy, the product has performed very well and there have been no problems with the long-term performance,” says Kadrmas.

Aside from aesthetic and cost reasons, there are real safety benefits to having construction crews spending less time on the highway.

“You don’t want repair crews working out there amongst the traffic and repairing the roads for extended periods of time,” says William Kirk, Technical Specialist at BASF. “Anytime you have road degradation, it’s a safety problem.”

By improving the pavement’s bond over time and reducing vehicle tracking, ACRONAL NX 4627 has proven to be an effective additive to asphalt emulsions. It helps get cars back on the road faster while reducing the frequency and severity of future maintenance efforts. 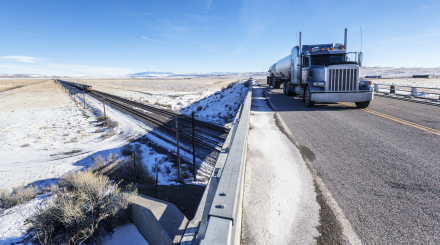 The nation's roads are more important than we may realize. Here's why we need to take a proactive approach to the nation's highways, and how science can help