In answer to tightening environmental regulations and rising consumer concerns over toxic emissions, a new hybrid dispersion on the wood finishing circuit is catching the industry’s attention.

Polyurethane dispersions and acrylic emulsions are often blended to achieve the performance desired for furniture and floor finishes. However, impaired performance of blends due to incompatibility may give the new NMP-free dispersions the edge over blends across the board.

Government regulations and consumer concern are major drivers for the reduction of volatile organic compounds (VOCs) and hazardous air pollutants (HAPs) in coatings, particularly those used over wood substrates where these materials can leach out over time. Two technologies remain dominant for wood coatings in North America. The most widely used technology for higher end furniture is that of solvent-based nitrocellulose lacquers and acid-catalyzed conversion varnishes. Due to the regulations and concerns already mentioned, UV and water-based coatings are on the rise in the North American market [1].

A tale of two waterborne systems

Acrylic emulsions and PUDs are two of the technologies competing with conventional solvent-based coatings, especially in furniture and flooring applications where emissions into consumers’ homes can occur.

There are pros and cons to both acrylic emulsions and PUDs.

Acrylic resins are lower in price than PUDs due to processing and raw material costs. However, many acrylics contain surfactants, which have the potential to bloom to the surface, so reducing the gloss of the coating. PUDs offer superior abrasion resistance because of intermolecular hydrogen bonding and can be produced without surfactants, allowing the coating to reach a high gloss level.

Also, because of the chemical bonding of hydrogen to water, which is considered to be a plasticizing effect, PUDs have a relatively low minimum film forming temperature (MFFT) in relation to their glass transition temperature (Tg), so less cosolvent is required for proper coalescence and final film hardness is not reduced, as it would be within an acrylic system [2].

NMP is used in the production process to assist the incorporation of dimethylol propionic acid (DMPA), a crystalline carboxylic acid polyol, into the backbone of the polymer.

Due to NMP’s high boiling point (202 to 204 °C), the hazardous solvent cannot be removed from the polyurethane dispersion. Typically, the level of NMP present in PUDs is between 10% and 15% [4].

The incompatibility results in phase separation of the polymers, which can cause internal strains resulting in inadequate coalescence. This leads to a coating with higher than desired permeability and reduced cohesive strength [2].

New technology has been developed to address regulatory concerns associated with NMP and the unpredictable performance of blending conventional acrylics with PUDs. Hybrid acrylic and PUD polymers have been processed without the use of NMP; instead, acrylic monomers are used as the solvent. These monomers contain functional groups which react with the available groups on the urethane, so allowing covalent grafting of the acrylic onto the urethane[5].

"The hybrid is made without NMP, to adhere to new legislative and consumer demands. It outperforms a physical blend of an acrylic and PUD because there are no issues with incompatibility, which can lead to weak spots in the final film."

Testing for performance: coatings and substrates

(1:1 blend on a solids basis of the acrylic and a PUD)

The calculated VOC of each coating is presented in Table 1.

For all tests other than hardness development, after wet application the coating was allowed to dry for seven days in ambient laboratory conditions prior to evaluation. For chemical resistance and adhesion to wood tests, the coatings were brush applied to sanded Hard Maple veneer at an application rate of 100 g/m2. For adhesion to metal as well as flexibility, the coatings were drawn down to obtain a dry film thickness in the range of 1.8 – 2.0 mils (45 - 50 μm) on cold rolled steel treated with “Bonderite1000” conversion coating.

Palmolive: you’re soaking in it (and other QA tests)

The polymers were evaluated for performance properties relevant to coatings that would be applied to furniture and flooring applications.

Chemical resistance was evaluated as a spot test where the chemical saturates a filter, which is then covered with a watch glass to prevent evaporation. Exposure times are eight hours to coffee, water and mustard; one hour to 70% isopropyl alcohol (IPA), 100% ethyl alcohol, “Formula 409” cleaner, 5% “Palmolive” brand dish detergent solution, and “Betadine” (povidone-iodine).

Hardness on glass was measured by pendulum at one and seven days and reported in number of oscillations. Measurements made in triplicate were averaged. Pencil hardness was also performed on the same wood panels as used for chemical resistance. 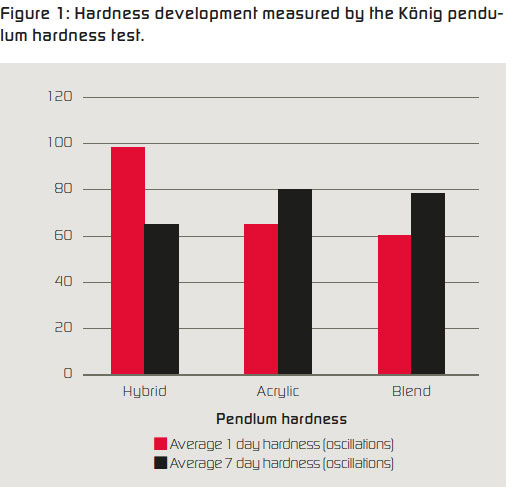 Flexibility was evaluated on cold rolled steel by carrying out both direct and reverse impact resistance tests. The impact ratings are reported in pounds when there is no damage or adhesion loss of the coating. Conical mandrel bend was also performed, fast and slow, according to ASTM D 522 – 93a.

Abrasion resistance was tested by “Taber Abraser” using 1000 gram weights and CS-17 rotating stones. The stones were reconditioned every 250 cycles. Measurements were taken at 500 and 1000 cycles and reported as milligrams of coating lost. 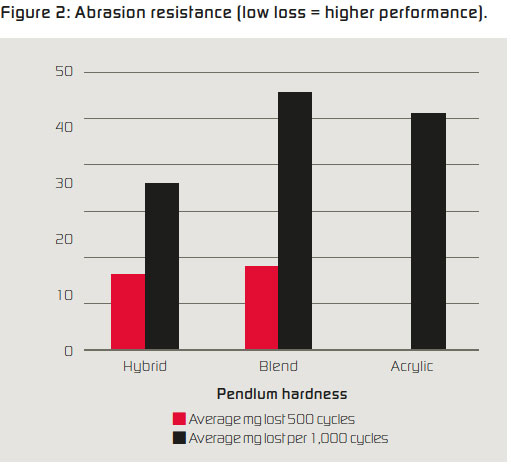 … on abrasion and scratch protection

Adhesion of a coating to a substrate is critical. Without proper adhesion, the coating is less able to do its job of protecting a substrate from damage and wear. Wet and dry adhesion tests were performed on Hard Maple, Red Oak, and Cherry veneer. The results can be seen in Table 2.

After analyzing the results of the adhesion test, it should be noted that the hybrid does not exhibit wet adhesion to maple. Hard Maple may exhibit difficulty with bonding; however, Hard Maple can have satisfactory bonding properties as long as the bonding conditions are well controlled [6].

Sanding conditions can also affect the adhesive nature of the wood; different grit sandpapers may be used to improve mechanical adhesion of a coating to wood substrates.

The adhesion to Cherry and Oak, however, make this a very viable product for use in furniture and flooring applications. It is worth noting that the formulation used is not completely optimized and that further optimization has the potential to increase adhesion to these species.

But how does it hold up to stains and solvents?

There are many possibilities of chemicals to choose from when evaluating a coating’s resiliency towards stains and solvents. In this study, the selection was narrowed down to eight. Performed as a spot test, the exposure times, ratings, and reasoning for the rating are shown in Table 3.

(Rating is 0 - 4, 0 = best, 4 = complete destruction of the coating. The difference between 0 and 1 is negligible; coffee staining was extremely minimal, where, unless an observer saw the spot themselves before evaluation, they would not see the actual stain afterwards.)

The results of chemical resistance testing show the hybrid generally outperforms the acrylic/PUD blend. Also notable was a complete recovery of the hybrid’s initial softening after exposure to 70% isopropyl alcohol and 100% ethyl alcohol when rechecked at 24 hours.

Hardness and flexibility – striking the balance

Pendulum hardness evaluates the hardness of a coating by measuring the stopping time of a pendulum put to motion on the coating. This means that the viscoelastic conduct of the coating governs its hardness. When the motion of the pendulum starts, the steel balls that rest on the coating’s surface roll and apply pressure. The harder and less elastic the coating is, the less of a damping effect it will have on the pendulum, meaning the longer the pendulum will continue to oscillate. In this case, hardness development was measured at one and seven days, the results being shown in Figure 1 above.

The hybrid exhibits early hardness development along with high final hardness, as measured by both pendulum and pencil hardness. This shows that the coating cures quickly, allowing for faster stackability or replacement of furniture if used for flooring applications. It also appears that the hybrid would be less viscoelastic than the acrylic or blend; however, the flexibility tests suggest this is not the case.

Flexibility tests are used to evaluate a coating’s ability to resist cracking. Impact resistance is a good test for assessing a coating’s capacity to avoid cracking and peeling from the substrate when it is exposed to a falling weight, which causes a deformation. This is especially important in applications related to the flooring industry, where a substrate is commonly subjected to falling objects.

Bend tests, such as the mandrel bend, give an indication of the elongation of the coating and its adhesive strength when exposed to bending stresses. The results of these tests are presented in Table 4.

The hybrid is shown to pair high flexibility with high hardness, making it an excellent choice for use in wood coatings. It is hard enough to be stackable yet flexible enough to expand and contract with the wood.

For flooring applications it is particularly important that a coating should offer protection against abrasion and scratches. One of the most common tests for evaluating abrasion resistance is the “Abraser”. Figure 2 above presents the data obtained from this test and the results are reported as the wear index of the coating: that is, the weight loss for the amount of revolutions made under a specified load of 1000 grams using a specific abrading stone.

It must first be noted that the clear formulation for the hybrid is not fully optimized. Further optimization of the formulation presents the opportunity to increase performance properties. The hybrid is made without NMP, to adhere to new legislative and consumer demands. It outperforms a physical blend of an acrylic and PUD because there are no issues with incompatibility, which can lead to weak spots in the final film.

The hybrid exhibits superior abrasion resistance, hardness paired with flexibility and chemical resistance. These performance properties present opportunities for this new material to be used successfully in furniture and flooring applications.

Learn more about the evolution of waterborne wood coatings here. 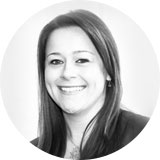 Ask the expert: 3 questions for the author