Formulators are exploring the science of permanent coalescents, while keeping one eye on performance

As ramping up environmental regulations create a wider marketspace for low- to zero-VOC architectural coatings, more resources are being devoted to finding the optimum levels of coalescent required for achieving high performance finishes. Formulators are exploring the science to meet new regulations, while keeping a keen business eye on performance.

What is the impact that an ultra-low VOC coalescent structure can have on coatings efficiency and performance properties, and why is one coalescent more effective than another?

High-performance coating formulation has long relied on solvent coalescing aids to achieve the perfect finish. Solvents emit volatile organic compounds (VOC’s) during the drying process and, with regulations pushing for the elimination of VOC’s, the interior architectural coatings industry has had to develop new methods to achieve the balance between performance and compliance.

Proper film formation is key to creating the low porosity, corrosion resistance and other desirable characteristics that are present in quality coatings. Historically, waterborne coatings have incorporated solvents as coalescing aids to properly marry the hydrophobic latex particles. Eliminating these aids is possible but often this results in the final film being too soft, so harder latexes have been developed to achieve the right performance. These require a coalescing aid to soften the system enough to form a continuous film during the drying process.

Permanent, or nonvolatile, coalescents are being introduced as the new superstars in environmentally friendly coatings formulation. These materials interact similarly to their volatile counterparts, but rather than being released as toxins during the drying process, they remain permanently solvated within the final dry film.

With long-term performance in mind though, it’s also important to consider and test potential drawbacks to the permanently embedded coalescents, which include poorer block resistance and increased leaching, particularly in secondary paint properties.

These agents have significant structural differences and formulating with them demonstrates the effects on primary coalescing and secondary performance properties in various latexes. 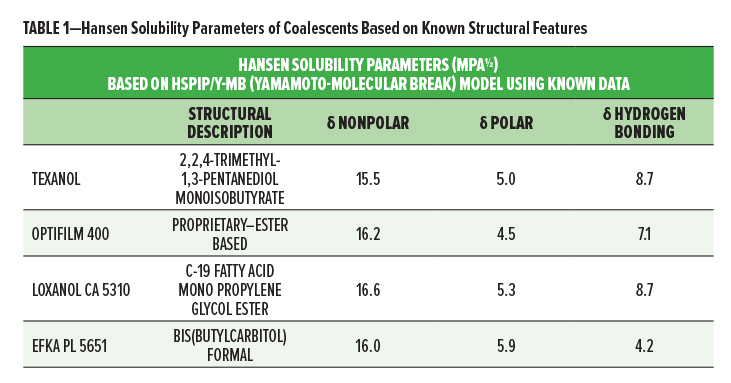 Hansen solubility parameters were estimated and may be different than reported in literature based on the Y-MB model within the HSPiP software tool (version 3.1.14). Although some assumptions are made within the model, directional fits were consistent with literature reported values for Texanol™ and Optifilm 400, which gave indications that, as a comparative tool, these predictions are relevant.

How low can you go? Testing the waters.

Three measured tests were run to determine differences in performance.

Efficiency test: Efficiency tests were conducted by adding 90 g of latex to a container, adding the appropriate level of coalescent to be tested, and adjusting with water to 100 g total. Samples were mixed under low shear paddle mixing for five minutes and then allowed to rest in a controlled temperature and humidity room (CTH, 50% relative humidity and 70°F) overnight. 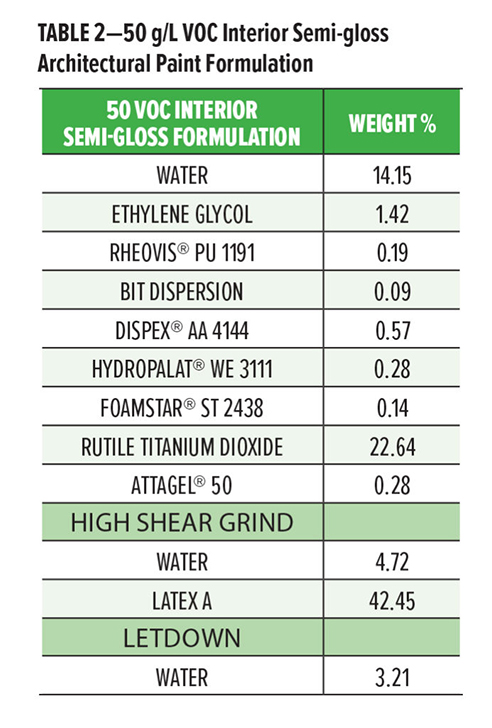 Some results were surprising 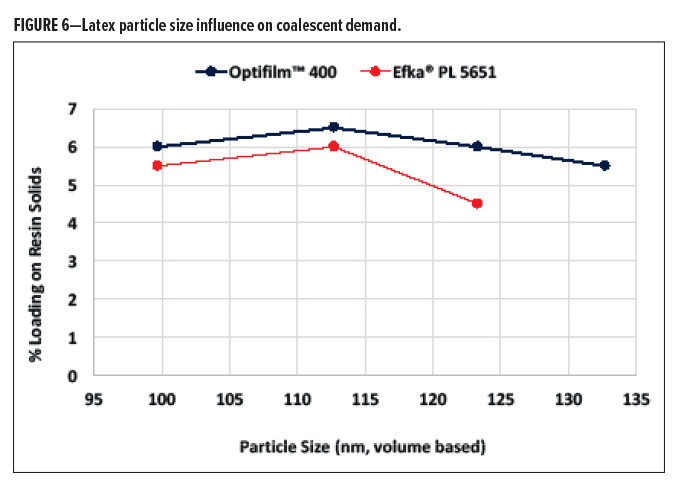 Latex B — Comparing the two coalescents from BASF, Loxanol CA 5310 and Efka PL 5651, showed that incorporation into the latex system was surprisingly not manageable with Loxanol CA 5310. However, samples made with Efka PL 5651 provided clean, clear films at temperatures as low as 4°C. Water solubility is a limiting factor with the Latex B system. It’s possible that the stabilizing surfactants in Latex B significantly changed the miscibility of the coalescent with the latex. 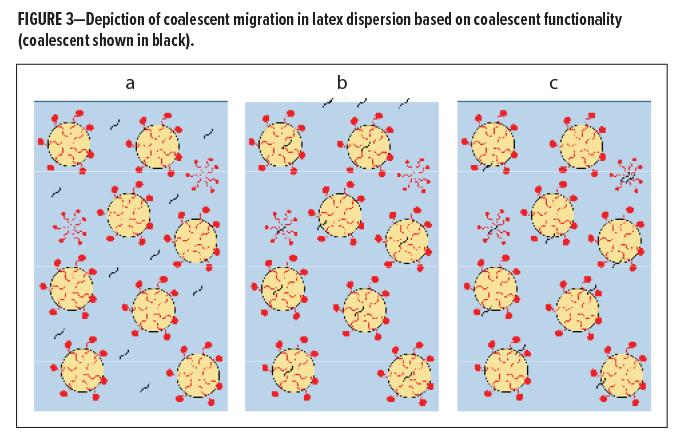 An explanation for the lower efficiency of the Loxanol CA 5310 compared to Efka PL 5651 is that the Loxanol CA 5310, being very surfactant-like in structure, is on the edge of compatibility with the hydrophobic latex and, being surfactant-like itself, leads to poor migration through the water phase to interact with the latex particles. If it can form its own micelles, that could potentially lead to reduced efficiency.

A visualization of the incompatibility can be seen in Figure 4. MFFT could not be recorded based on the creeping and film issues seen when Loxanol CA 5310 was used in Latex B (due to immiscibility). 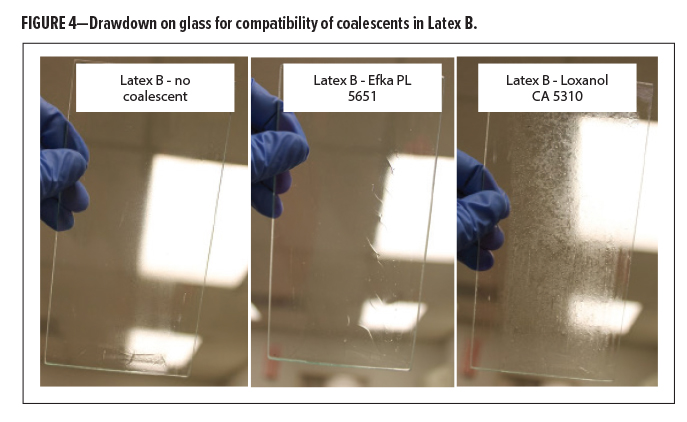 Latex C — The loading study of the three coalescing aids showed that the order of efficiency was Efka PL 5651, Loxanol CA 5310, followed by Optifilm 400. Loadings were evaluated to reach an MFFT of 0°C. All systems at these loadings were stable and miscible (Figure 5). 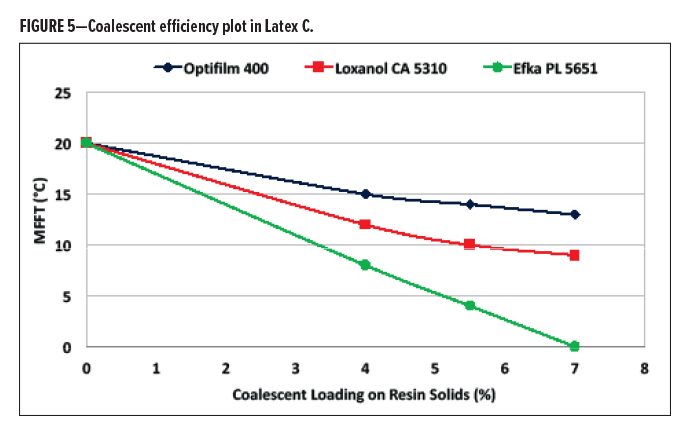 Before drawing final conclusions, it was important to evaluate the three ultra-low VOC agents against a traditional volatile agent that has proven performance. Texanol is a traditional volatile coalescent that historically has been high performing across multiple systems. Formulators strive to reduce the amount of low molecular weight materials, which at higher loadings can lead to more poor paint performance properties.

The comparison was tried using a 50g/L VOC interior, semi-gloss paint formulation, with equal loadings of coalescent used on resin solids. The resulting paints were measured for several properties that were identified as being most critical:

Gloss — ultra-low VOC agents performed better. As film formation improves, gloss typically rises due to the smoothness of the coherent film formed. In this case, Texanol™ may be too volatile prior to the paint drying to achieve maximal gloss (Table 3).

Stain resistance — provided the most surprising results of this testing. ΔE (change in energy) values were measured for each stained area compared to the unstained panel to indicate strength of stain removal. ΔE values were then measured for the individual stains in the three permanent coalescent systems. Results showed that ultra-low VOC coalescents, dependent on structure, may improve stain resistance (Table 4). The improvement in both aqueous hydrophilic and hydrophobic stain was unexpected.

Hardness — is often a concern with permanent coalescents and, as suspected, low- to zero-VOC agents did not perform as well as the volatile Texanol-based system (Table 3).

Scrub resistance — was not affected by the low- to zero-VOC agents. 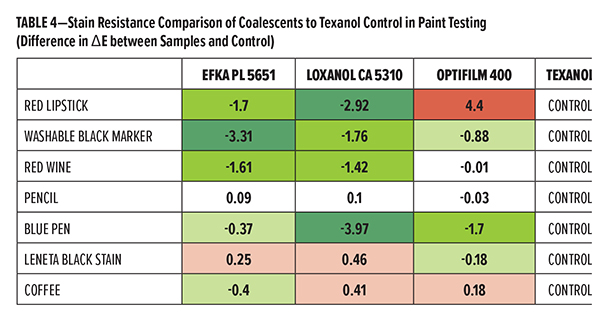 The common denominator for permanent coalescent agents used in low-VOC formulation is that there is no common denominator. The efficiency differences between coalescents Optifilm 400, Loxanol CA 5310, and Efka PL 5651 were significantly dependent on the system in which they were being investigated. For achieving proper film formation every time, coalescing aids should be tested independently for each system.

The full original version of this article is courtesy of BASF and published by the American Coatings Association.