If water is the source for most problems in any structure, a well-specified sealant is a structure's first line of defense. But not all sealants are created equal, and not every installation is trouble-free.

That's why we enlisted the help of Thomas Karlson, Parking & Restoration Specialist at BASF Corp. In Minneapolis, MN.

Karlson spends most of his time traveling the Midwestern United States helping contractors and owners solve moisture challenges in buildings.

In short, he's seen a few things. We asked him to help identify some of the common causes of sealant failure and to provide tips for addressing them. Thanks Tom!

To prime or not to prime

To prime or not to prime

A huge problem in the industry, according to Karlson, is the "prime all the time" mantra. Karlson advises against this practice, warning that primers won't go over all sealants and substrates. Instead of enhancing adhesion they end up acting as a bond breaker, which leads to early joint failure.

Prevention: Do a mock-up test before starting work and be sure to test all the substrate materials involved, because you won't know what happens until you try it.

"That's one of the things I want to really stress — do a mock-up," says Karlson. "When you have different types of substrates, such as stone, granite, concrete, different types of metal or vinyl window frames coated with unknown finishes, you don't know how they react until you do a test."

Karlson says to do primed and unprimed mock-ups so you can see the difference.

Problem: Most joints move. Most substrates move. If there is excessive contraction or expansion, it could be because of extreme weather or improper joint design — or both.

Prevention: This is best dealt with in the design phase by designing proper expansion joints and ensuring the joints are optimally spaced to allow for the expected degree of movement.

Problem: The best time to install a sealant, according to Karlson, is in the spring or autumn. That's when a joint is at its "in-between" point of movement. Installing in warmer or colder temperatures means the whole joint will experience a lot more extension or contraction.

Prevention: Let's face it, jobs happen all year round. To tackle this problem, make a wider joint and use the right sealant. Tom's rule of thumb: specify a joint design and sealant that takes plus or minus 25 percent movement in either direction.

Karlson shared a classic example of this, which he discovered on a road at an air base many years ago. Workers installed a joint cut in the shape of a "V," put backer rod in it, and then poured a self-leveling sealant on top of it. The backer rod floated up because the V-shaped joint had no way to keep the rod at the bottom of the joint — it just kept being pushed up and out of the joint as they added more sealant.

The joint failed adhesively (it wouldn't stick to the substrate) and cohesively (it shredded within the joint). Karlson says the fix was to go back and cut the joint straight down so the backer rod would sit correctly. "But they had to cut out all 31 miles and redo everything," says Karlson, highlighting risks of poor installation.

Prevention: Specify the right type of joint for the situation, and the proper sealant to handle the movement and environmental exposure.

Prevention: Some primers will help bind together or solidify the outer layers of the substrate. The only other way to deal with this is to grind or cut out the failing material. If you do nothing, the sealant will bond to the top layer and any movement will pull away the failing substrate.

Keep in mind that all these problems depend on how much joint movement there is. If there's no movement, there's no stress on the bond line and the joint will likely be fine. 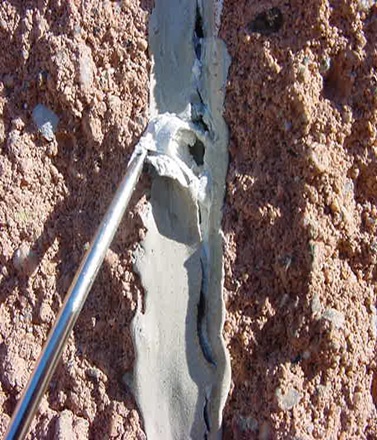 Problem: In multi-component sealants, the activator and a color pack must be mixed into the sealant. Karlson recommends scraping the sides of the bucket when mixing. If you don't, you risk pulling unmixed material into the gun. Most of the joint will cure properly, however there will be patches of sealant that never cure because of poor mixing.

Prevention: Karlson says this issue is most common when using pre-tinted sealant because it's harder to tell if it's properly mixed. He recommends always using a color pack and mixing the sealant in a clean bucket. First, add the activator, then the color pack. That way, when you see the color is uniformly mixed throughout the bucket, the activator will be as well, and you won't get an inconsistent cure.

Problem: Applying water repellent too soon. According to Karlson, it might not stop the cure but will affect the cure and the sealant won't perform as designed.

Prevention: "I see this a lot on restoration jobs" he explains. "A crew will cut out the old sealant and install new sealant properly, but because the platform or scaffolding is rented for a short time, they immediately spray the water repellent. And then everything is doomed." 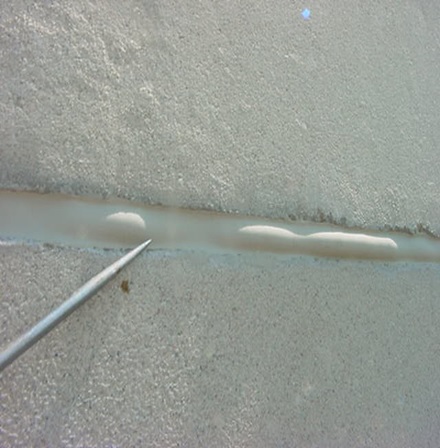 Problem: Some backing material, such as closed-cell backer rods, will outgas for a couple of hours after being punctured. It won't bubble right away, but a few hours later a bubble will form.

Karlson says this issue is also common when using self-leveling sealant in moist or very humid conditions. Many sealants create a gas as they cure, and self-leveling sealant cures from the top down. When it skins over on the top of the sealant, and the backer is too deep, all the extra sealant trying to cure begins to outgas. He says this is generally not a problem for most two-component sealants or urethanes.

Prevention: Specify the correct backer rod, don't puncture the backing material, and don't install too much sealant in the joint.

Problem: The sealant did not cure to the specified color when dry, or part of the substrate touching the sealant has been stained.

Prevention: This is often caused by wet tooling — the practice of using isopropyl alcohol or soapy water when tooling the joint to make it easier to work with and give the joint a smooth, attractive finish.

"Part of the problem with soapy water is that it will discolor the sealant, depending on what kind of sealant it is," says Karlson. "Also, if soapy water gets on the edge of the sealant, it can affect the bond as well."

Interested in learning more and earning AIA credits?
Take the Introduction to Caulks and Sealants Course on Hanley Wood University