Frances Arnold speaks to BASF about winning the most prestigious award in chemistry.

If you haven’t yet heard of Frances Arnold, Ph.D.—you certainly should. This enzyme-engineering pioneer is only the fifth female laureate in history—and the sole American woman—to be awarded the Nobel Prize in Chemistry.

Arnold, 62, the Linus Pauling Professor of Chemical Engineering, Bioengineering and Biochemistry at the California Institute of Technology (Caltech) in Pasadena earned the award in October 2018 thanks to her work with the “directed evolution” of enzymes, proteins that propel chemical reactions. She received half of this close to $1-million award, while the other half was divided between two other scientists—George Smith of the University of Missouri-Columbia and Sir Gregory Winter of the MRC Laboratory of Molecular Biology at the University of Cambridge.

Chemistry is what allows us to survive with 7 billion people on the planet and not destroy everything around us.

More than 20 years ago, Arnold acknowledged the power of evolutionary design by mimicking Darwinian evolution and manipulating enzymes through random mutation and recombination of DNA, so that they could be used as tailored chemical catalysts. This bioengineering method works similarly to the way dog breeders mate certain dogs to draw out specific traits. But here instead of breeding pets, Arnold uses molecular biology to breed enzymes. Utilizing this method, she created extremely powerful catalysts that possess greater stability and reactivity. What takes thousands of years in nature now happens within hours in a lab—thanks to her research. Arnold’s enzymes have been used to make biofuels, laundry detergent and medicines, among other things. In several processes, they’ve been made more sustainably, such as pharmaceuticals and the production of renewable fuels for a greener transport sector.

The Pittsburgh native has received numerous awards prior, including induction into the National Inventors Hall of Fame (2014). She holds more than 50 U.S. patents and has served on the science advisory boards of several companies. Arnold is a Princeton University alum who holds a doctorate degree in chemical engineering from University of California, Berkeley. She’s also the mother to two sons, James Bailey, 28, a flight technician working at NASA Jet Propulsion Laboratory and Joseph Lange, 21, who’s in college.

As it comes with the territory of winning a Nobel—Arnold has been inundated with an influx of congratulatory emails, texts, social media posts and press coverage for her groundbreaking work with enzyme engineering. And yet—she still graciously took the time to speak with chemical company BASF. Arnold and BASF are no strangers. The chemical engineering professor spoke at the Science Symposium in Chicago to celebrate BASF’s 150-year anniversary. She is also affiliated with the company through the “California Research Alliance” (CARA) founded on the West Coast in 2014. Additionally, BASF Venture Capital recently invested in Provivi, a company founded by Arnold and two of her former students in 2012. Provivi focuses on the manufacturing and product development of pheromones in agricultural use, partially derived from bio-catalysis technology. 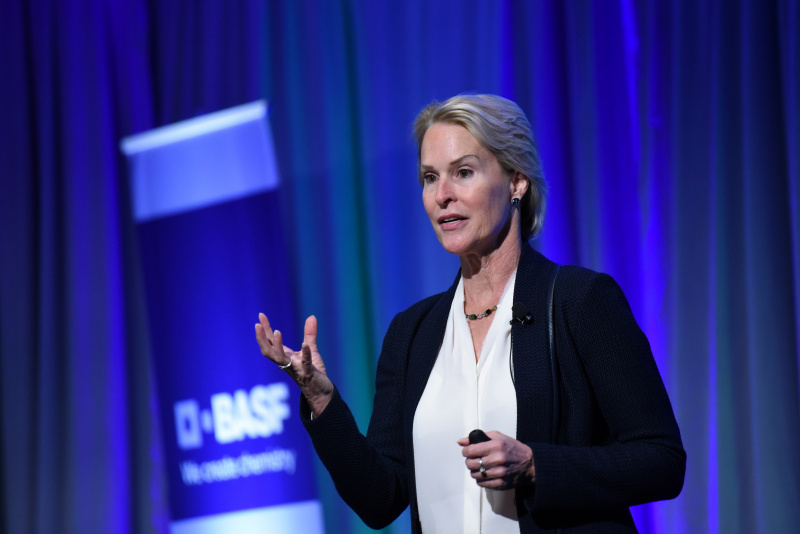 Arnold speaks at the Science Symposium in Chicago for BASF's 150-year anniversary celebration.

BASF: Congratulations on your amazing achievement. We’re all delighted for you. How does it feel to earn the highest award in the world for your work?

Frances Arnold: There’s a lot of hoopla that goes with winning the Nobel prize, which can be overwhelming, but I’m trying to keep my eye on the real meaning of this and what a wonderful tribute it is to all the hard work of my more than 200 former students and current students. We’re all thrilled.

You’re the fifth woman in history to win such an award. Is this something that’s important to you personally?

Well, of course, I’m very glad the Chemistry Committee (of the Royal Swedish Academy of Sciences) took the trouble to research the chemistry done by us and decide that it was worthy of the prize. My prediction is that there will soon be more prizes to women because they’re doing great chemistry.

We’re, of course, a chemical company. I know you consider yourself a chemical engineer. But is there a chemist in you as well?

Sure, I’ve been accused of being a biochemist, a molecular biologist. My training is in chemistry and chemical engineering, so I could be called a chemist as well. But I’m mainly an engineer in the sense that I want to find solutions to problems. I set out to create things that would be useful to human beings. Whether that’s chemistry or chemical engineering, I think that’s a goal shared by several disciplines. I use whatever tools would solve those problems—even if I had to invent the tools.

You’ve been interested in engineering from an early age. You grew up with four brothers, your father is a nuclear physicist. This affected your upbringing and interests. Would you say that chemistry is still viewed as a more male-dominated field?

Certain aspects may be male dominated in the sense that there are more men than women. But I’ve watched that change dramatically over my 30-year career and starting even before that. Women now represent half of our undergraduate body at Caltech and there are many more women in chemical engineering than there are men. Women are making great strides in my field, and they are doing phenomenal work.

What was it about chemistry that appealed to you?

When I moved from mechanical and aerospace engineering more into chemistry in graduate school, what appealed to me was the chemistry of the biological world. I was fascinated by enzymes that could convert one form of matter into another with beautiful specificity and efficiency. These are molecular machines unlike any kind of machine that a human had invented—and they could do chemistry better than any human. When I learned biochemistry, I said, this is what I want to engineer. I want to engineer the catalysts of the biological world!

Your work with the directed evolution of enzymes and proteins won you the prestigious Nobel. You’ve mentioned that this allows you to use greener biological manufacturing processes such as main fuels and chemicals we use in everyday life. Our company is big on sustainability. Is going green important to you in your work and personal life?

It has been an important driver of my work since the very beginning. My first job out of college was at the Solar Energy Research Institute when the U.S. had a national goal of 20% of renewable energy by year 2000. That was in the 1970s and I have stayed with that goal and the view that our environment is worth preserving, and that we need to learn how to live efficiently and sustainably.

Do you think to some it might seem like an oxymoron—working in chemistry and trying to be green, does one cancel the other one out?

Not at all. Humans have been doing chemistry for tens thousands of years and they’ve done it greenly. More recently we’ve not been so careful. So, I hope that we can invent methods that will help us do chemistry that is more conscious of the environment. We need chemistry, but we can do it better.

Right, we need chemistry. It’s almost a shame that our pop culture doesn’t glorify chemists and inventors more and, for instance, reality celebrities less. Do you think that’s because most of the world doesn’t find chemistry sexy?

I don’t think ‘sexy’ is as important as inspirational. In the world that I live in, what is attractive is doing something useful and helpful for the world.

On that same subject, in your view, why is chemistry important in everyday life?

Chemistry is what allows us to survive with 7 billion people on the planet and not destroy everything around us. We use chemistry to feed ourselves, provide clothing, housing, transportation, entertainment—all these things in our daily lives come through chemistry. But we can do it better than we are doing it now. I’m convinced of that.

Is there anything you’d like to see a chemical company as BASF do differently or more?

I’d love to see even more commercialization of green chemistry and the use of renewable resources. One problem is that we need to make money at it at the same time. I’m hoping that people’s tastes will change and that they will demand products that do not damage the environment, will demand the use of renewable resources, and that companies will respond with the right technologies.

What word of advice would you give to the young girl who’s interested in STEM subjects in school, or entering the chemical work arena?

I would tell them that this is fun, creative work that helps humanity. Don’t leave it just for the boys.