Without the plastic lining, your takeaway paper cup can’t hold the delicious hot beverages inside. That’s just the way the coffee cup crumbles.

Despite consumer demand for plastic-free cups, plastic lining has been used by the food and beverage industry for many years. The polyethylene lining on a standard paper coffee cup retains heat, proides a barrier to liquids and maintains the cup’s structural integrity. However, the use of polyethylene limits the recyclability of the post-consumer cup.

After attempts to incentivize the use of reusable cups, establish in-house recycling programs and incorporate recycled materials into their cups, heavy-hitters like Starbucks and McDonald’s are looking for a more impactful, lasting alternative to the plastic-lined paper cup.

The NextGen Cup Challenge aims to help them find that game-changing innovation for a truly sustainable cup design.

The challenge recently named twelve winners, each with a chance at mainstream adoption — but the opportunities for innovation don’t end there. To really stand a chance at long-term commercial viability, the paper cup must be durable, cost-effective and fully recyclable.

All that is easier said than done, but BASF has developed a water-based polymer to tackle the obstacles standing in the way.

Most recycling facilities are not equipped to mechanically sort the plastic lining from the paper. During the repulping process, paper mills can easily remove most contaminants and filter out unwanted substances such as dirt, dyes, and other residue. What makes the plastic liner different from other materials is that it breaks up into relatively large flakes that pass through coarse pulping screens but clog the fine screens. Instead of working with clogged filters, which are disruptive to productivity, it is easier to send the plastic-lined cups to the landfill.

The polymers can be formulated into water-based coatings that are heat-sealable, block-resistant and also provide a liquid barrier.

Over the last few years, several paper mills have made adjustments to the recycling process to the extent that there are paper mills that can repulp and recycle the polyethylene coated cup. However, most paper mills are not yet modified for the purpose.

Despite proof that it’s technically possible to recycle your typical plastic-lined paper cup, most recyclers lack the incentive to make it happen. Generally speaking, cup materials are not valuable enough to justify the cost of processing it.

In other words, even if consumers conscientiously use the blue bin, the vast majority of paper cups are tossed in landfills.

A tall order for paper cups

Potential solutions are coming in at all angles, from every corner of the world. Among the winners of the NextGen Cup Challenge were a reusable cup rental system, a plant-based and biodegradable single-use cup, and a fiber-based cup and lid. Runners-up included a gourd cup grown in 3D-printed molds and a compostable cup grown from mushrooms.

To choose the right cup model for the future, food industry leaders need answers to several tough questions: Is the model cost effective? Can it be collected and reprocessed in existing systems? And, perhaps most importantly, does the cup perform as well as or better than the average plastic-lined cup?

It’s not yet clear whether any of the challenge winners satisfy all of those demands. As the Globe and Mail notes, “The winning cup is one that will have to fit with existing recycling and waste-recovery infrastructure all over the world. It also has to meet existing food-safety and health regulations all around the world.”

In an effort to overcome issues barring the path to a sustainable beverage cup, BASF recently developed water-based polymers that provide the required performance on paperboard used for cup manufacture.

"The polymers can be formulated into water-based coatings that are heat-sealable, block-resistant and also provide a liquid barrier," explains Andrew Seecharan, Market Segment Manager for Functional Packaging at BASF. "In addition to providing performance similar to polyethylene, the polymers have demonstrated repulpability and recyclability using laboratory protocols based on the Voluntary Standard for Repulping and Recycling issued by the Fibre Box Association.”

Based on the voluntary standard, repulping refers to fiber recovery from pulped, coated board when passed through a specific screen. Recycling includes use of up to 20 percent of the repulped fiber to prepare handsheets, which are subsequently evaluated for performance and appearance. Coated paperboard approved by the test protocol can be used to produce new container-board and other paper products.

Because the water-based system contains no additional contaminants that need to be separated, it plays well with the paper repulping process, returning valuable paper to the material stream.

It also meets food safety standards. After rigorous extraction and migration studies, the polymers are approved for food contact as documented by Food Contact Notifications 1974 and 1977 which were reviewed by the United States Food and Drug Administration.

"Since the coatings can be applied using existing gravure or rod coating equipment, the new technology is a practical alternative for formulators and converters," Seecharan says.

At this point in the process, consumers, manufacturers and food industry leaders understand the stakes. More than 600 billion cups are produced and sold around the world each year. According to some estimates, fewer than 1 percent of the resulting waste is recycled.

That’s a lot of cups in landfills. Food and beverage companies are feeling the pressure from consumers, and now it’s up to manufacturers to turn their ideas into viable products.

With its repulpable liquid barrier polymers suitable for current recycling processes, BASF is calling on coating formulators to take that leap into the next generation of food packaging. To take the first step, request a sample today.

Infographic: The (Polyethylene) Elephant in the Room Download
Paper cup recyclability? Let's talk solutions. Thanks to innovative polymers, there is now a solution that can combine paper and performance. 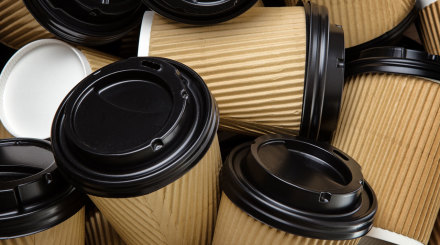 We’ve been asking #WhatAboutTheCup to shed light on the paper cup recyclability issue. Now it's time to talk solutions.