Time is money, as the adage goes, and no one understands this better than aircraft manufacturers who are waiting for paint to dry. 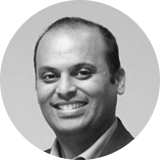 To address this challenge, BASF has introduced a photo-latent metal catalyst called Solyfast™ for the aerospace market. Industry experts are excited about the potential benefits: shorter curing times, energy conservation, improved ecology by replacing tin with non-tin based catalysts, and increased pot-life.

We sat down with Avinash Bhaskar, Market Segment Manager, Transportation Coatings at BASF to find out how a photo-latent metal catalyst will increase throughput for aerospace OEMs.

How is a photo-latent metal catalyst different from a non-latent catalyst?

Avinash Bhaskar: Solyfast, a photo-latent catalyst, differentiates itself from tin catalysts — which are non-photolatent catalysts — in that it uses a UV light-triggered catalytic activity at room temperature to reduce curing times significantly.

With tin catalysts, you need to use heat at 60 to 80 degrees Centigrade (or 140–176°F) to cure quickly. Since most operations are done in large hangars, the heating of it takes time and is costly.

What are the advantages of using UV light instead of heat to cure?

AB: Let’s use the aerospace industry as an example. The clearcoat on an aircraft takes roughly 10 to 14 hours to completely cure. That doesn’t include the time to prep the plane and actually apply the coating. Typically, an aircraft sits in the hangar for 48 hours before it can be returned to service.

Why a photo-latent metal catalyst?

So, there is a definite demand in the industry for faster drying in order to increase throughput. This is especially relevant if you look at the aircraft after-market, which we call maintenance, repair and overhaul. They want planes in and out fast to free up the hangar for more jobs.

I should also mention that Solyfast is considered a dual cure because it can also be used for thermal cure. Thermally, if you're not using a UV source the curing is slower, but it will still cure. If you can imagine the shadow regions where you can't take a UV source — on the aircraft underbody, for example — it will still cure, but at a slower pace. This also addresses issues of heating very large objects, heat-sensitive parts, or heavy metal structures. Apart from aircraft, service vehicles such as ambulances and fire-engines may see a benefit in using this catalyst in their coatings to help return them to service sooner.

Why is increased pot life important to OEMs?

AB: An increased pot life means you can mix more paint at once, maintain the paint for a longer period of time, and ultimately decrease the overall amount of paint waste. With a tin catalyst you’re looking at a pot life of less than an hour. With Solyfast it’s three to six hours, which is a pretty significant difference.

What other applications can Solyfast be used for?

AB: Really any application or industry where out-of-service costs are high. Think about things like military, emergency vehicles, construction equipment, and factories. Sometimes they need minor re-touch coating and want to get them back into service as soon as possible. This gives them that option.

AB: Solyfast is a very unique product for us. It is commercially available and is being used in aircraft coating applications. It’s going to play a key role in North America because it adds a lot of value in terms of curing time, energy consumption, and increased throughput.